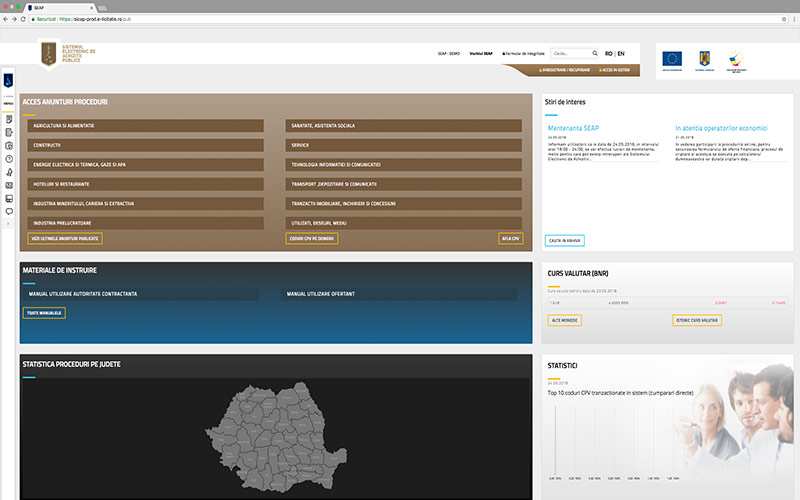 Over 400,000 direct purchases have already been initiated within the new public acquisition information system, SICAP.

UTI has developed and implemented the Collaborative information system for public acquisition (SICAP), according to the contract awarded by public tender in 2014, whose beneficiary is the Romanian Agency for Digital Agenda (AADR). The value of the project is RON 21,902,819.00.

A month and a half since its official launching, over 400,000 direct purchases have been already initiated within SICAP, a fact that proves the system’s robustness and reliability. Approximately 600,000 users, belonging to over half a million separate entities have connected and worked on the online acquisition platform, starting with the 2nd of April 2018 up to the present.

Also, 3,000 new public procurement procedures have been launched within the new system.

SICAP has become a working environment for all the actors involved in the process of public acquisitions: contracting authorities, tenderers, regulatory and control institutions.

During the transitional period from SEAP to SICAP (the new SEAP), estimated to last approximately 2-3 months, the two platforms are working in parallel, as this strategy was decided to be the most appropriate for a national system of such importance.

Why was the shift from SEAP to SICAP necessary?

SICAP became a necessity the moment SEAP’s technological capacity was exceeded due to the very high rate of use. Then, there were required interface updates, improved ergonomics and flexibility, especially for direct purchases, that are extremely accessed. Also, the integration of new legislative provisions made it mandatory to develop a new system.

Although the shift from SEAP to SICAP came as a natural phase, the system implemented by UTI in 2006 was the first electronic acquisition platform in Romania and has met the functionality and security requests of the contracting authorities for 12 years. It has been a robust system that ensured complete protection against cyber attacks and no bottlenecks were registered.

The SICAP project aimed at developing a flexible, modular and efficient information system for the proper performance of the public acquisitions, according to the European Union requirements and the public aquisition laws in force. Taking into consideration the huge amount of data and business processes implemented within SICAP, as well as the large number of users accessing the services through public networks (internet), the system security is a key element for SICAP. The UTI solution includes a large range of security control mechanisms: the classical ones such as VLAN isolation, IP addresses translation, firewall, IPS/IDS systems, as well as PKI-based security mechanisms or DDOS (distributed denial of service) protection against cyber attacks.

Besides AADR, which is the direct beneficiary of the SICAP project, the new public acquisition system brings advantages to contracting authorities, private companies, as well as to citizens: