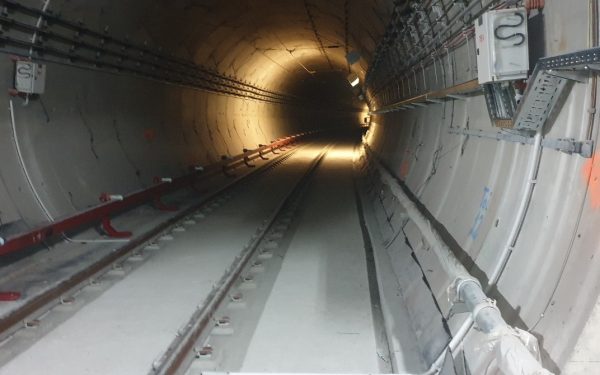 The works for Bucharest Metro Line M5 are expected to be completed soon. UTI Grup has provided the installations that enable the proper operation of the metro stations and of the underground infrastructure.

The works for the Bucharest Metro Line M5, Raul Doamnei–Eroilor section, are nearing completion. The first tests with trains without passengers took place on the weekend of June 20-21, 2020.

Line M5 is one of the most important urban transportation infrastructure projects in Romania, not only due to the complexity of the works performed, but also because it will connect one of the largest neighborhoods in Bucharest, Drumul Taberei, to the city center and will improve the metropolitan transport, as well as the traffic in the western area of Bucharest.

Raul Doamnei-Eroilor section of the Line M5 consists of 10 stations (Eroilor, Academia Militara, Orizont, Favorit, Drumul Taberei 34, Parc Drumul Taberei, Romancierilor, Constantin Brancusi, Raul Doamnei and Valea Ialomitei depot). Each station has 3 levels and each level has several technical rooms that ensure the proper operation of the network. Behind the visible infrastructure for passengers, there is an impressive and complex structure of state-of-the-art equipment and technology, as well as the sustained work of the implementation teams.

In this segment, the subway will have a minimum travel time of approximately 12 minutes and can transport 50,000 passengers/hour/direction.

The contract for the works related to this stage of development of M5 was signed in July 2015, while the actual execution of the works under the responsibility of UTI began at the end of January 2016. The project was marked by delays in completion due to late delivery of work fronts in early 2016 and, more recently, the coronavirus pandemic. These postponements led to the adoption of some technical execution procedures different from those originally designed.

Despite the difficulties, UTI made sustained efforts to complete the project, assigned a dedicated team of approximately 200 specialists and constantly collaborated with the beneficiary to identify the best implementation solutions.

The installation project for the Metro Line M5 5 is a solid reference for UTI Grup through the complexity and diversity of the installed systems. The success of this achievement is due to the company’s experience in similar projects, carried out in Romania and abroad, as well as the professionalism, involvement and determination of the UTI team.