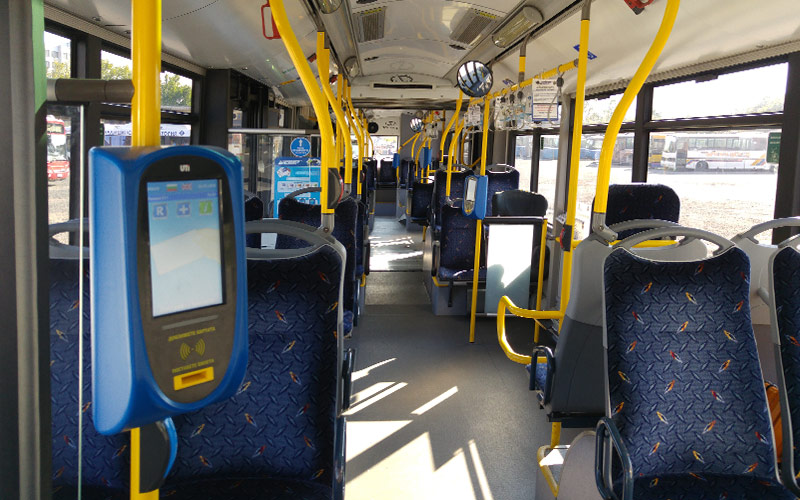 In February 2015, UTI signed a contract to implement the integrated public transportation management in Burgas, Bulgaria.

8 months after the start of the implementation, in October 2015, a pilot project has been launched to demonstrate the functionalities and advantages of the system. Thus, the video surveillance functions have been tested for 3 intersections that have been equipped with mobile and fix video cameras. The video flows received from the cameras are sent through a fiber optic communication network to a control center where the images are displayed on a video wall and on the operators’ workstations. Subsequently, this information will be processed by means of video analysis algorithms.

The main functionalities of the dynamic information systems have also been presented – the information displays in vehicles and bus stations, the automated fare collection system that integrated the proprietary validator and the video surveillance system mounted in vehicles.

The project, whose main goals are to improve and render efficient the public transportation, to increase passengers’ comfort and safety and to integrate various municipality services within the control center, will be finalized in august 2016.

The Burgas project is the second ITS (Intelligent Transportation Solutions) project UTI has developed in Bulgaria, following the maintenance and modernization of the traffic lights system in Sofia. UTI is also developing public safety, urban video surveillance and acoustic signaling project in Varna, a video analysis system for the metro stations in Sofia, public safety, parking and integrated building management system for a commercial mall in Veliko Tarnovo.

News
The public transportation system in Burgas was presented in the local newspapers
Tiberiu Urdareanu, UTI President, at ZF Live: The databases administered by the public institutions must be interconnected