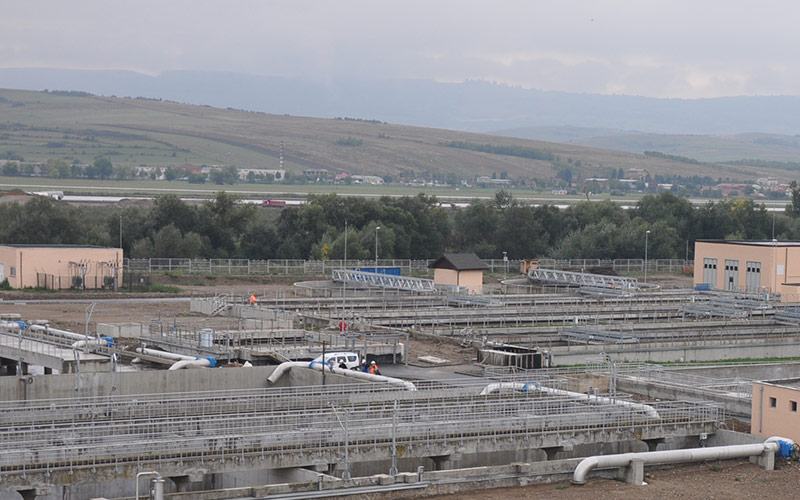 UTI Grup and associates Gruppo Intini Angelo and Giovanni Putignano&Figli hereby communicate the completion of the project for the rehabilitation and expansion of the Cluj-Napoca water treatment plant, co-financed by the EU Cohesion Fund, within the Sectoral Operational Programme “Environment” (SOP ENV), worth of Ron 147.95 million (approximately Eur 35 million). On the occasion of the inauguration, an official ceremony will take place on November 26 2013, in the presence of the Beneficiary – the Somes Water Company – and the official representatives of Cluj-Napoca authorities.

The design, construction and commissioning took 21 months and aimed at:

The proposed technical and technological solutions observe the requirements of the beneficiary, the Somes Water Company, as well as European (EC 91/271/CEE) and national law (NTPA 001/2002) in the field.

During the unfolding of works, the station was operational, the constructor ensuring the continuity of the treatment flow of the household waste water generated by the approximately 367,000 inhabitants of Cluj-Napoca and the observance of the physical, chemical and biological parameters of the water discharged in Somes river. The new constructions were gradually integrated in the technological treatment process.

The new waste water treatment plant in Cluj Napoca, the third largest in the country by size and the most ample project built through SOP ENV during 2007 – 2013 is a modern plant that combines the waste water reclamation process with the sludge processing and use technology in order to produce biogas and generate energy, providing 45% of the plant’s energy independence.

The advantages and benefits of this project are multiple, both for the beneficiary – Somes Water Company – by increasing the plant performance and streamlining the operation costs, and for the inhabitants of the city, who will thus experience a cleaner environment and quality natural resources.

UTI Grup carried out similar works for the Oltenia Water Company, within the project entitled “Rehabilitation and modernization of water sources and treatment plants for the municipalities of Scornicești, Potcoava, Drăgănești Olt and Piatra Olt, and currently unfolds works for the rehabilitation and modernization of the water treatment plans in Filiași (Dolj County) and Dorohoi.